THE OPPOSITION CYCLE OF MARS

When Mars is in Conjunction the Sun is between Mars and Earth. Opposition , or when the Mars is on opposite side of the Earth from the Sun, will occur approximately 390 days after conjunction. At opposition the Earth and Mars will be nearly in a straight line from the Sun.

The Martian year is 1.88 tropical Earth years consisting of 668.59 Martian days (sols) or 686.98 Earth days.  The mean synodic period is 779.94 mean days. We find the synodic period from the mathematical expression:

A general rule for predicting oppositions of the Red Planet; Mars has average 15.8-year seasonal opposition cycle, which consists of three or four Aphelic oppositions and three consecutive Perihelic oppositions [ Capen , 1984, Capen , 1984]. We sometimes refer to this as the seven Martian synodic periods. This cycle repeats after every 79 years, with an error of several days (4 to 5 days), and if one would live long enough they may see this cycle nearly replicated in 284 years [ Frommert , 2008]  ( See Table 1 ).

Table 1. A list of dates when the apparent diameter of Mars was and will be over 25 seconds of arc over a period of plus and minus 284 years from the next apparition in 2003.


IN 2003 MARS WAS CLOSER TO EARTH SINCE TELESCOPES USED

During a conversation with syndicated television personality and astronomer Jack Horkheimer asked the ALPO Mars Section to compute the date when Mars last came as close to Earth as it is predicted to approach Earth during the 2003 Perihelic apparition [ Horkheimer , 2001]. He posed an interesting question and one that the answer was not readily available. Since our computer programs are written to calculate the physical Epemerides of Mars for the life span of a typical observer there was no practical reason to compute the orbits and other aspects of Earth and Mars for more than a hundred years or so.

Several computer runs were made using this author’s PC and it soon became clear that this problem was too much for a home computer to solve in a timely manner. So, we enlisted the aid of a Jim DeYoung, a former coworker and employee of the U.S. Naval Observatory Time Service, for his expert help to answer this most intriguing question. The problem that was posed to Jim: when was Mars as close or closer to Earth as it will be during the 2003 apparition?

Jim is a mathematician and computer specialist by trade and is interested in astronomical calculations. This was just the problem for Jim to help us solve. He prepared a computer program using the integration method used was the Burlirsch-Stoer method to calculate the orbits of and perturbations of all nine-planets [ James DeYoung , 2002].  This included the major perturbations and effects of the Moon and the four major asteroids to plot the results. During Jim’s off duty hours he ran the program constantly until a plot of each time Mars was near opposition at the closest approach to Earth. We arbitrarily chose a limit of +/- 100,000 years starting with this author’s last birthday on October 17, 2001 (JD 2452200.5).

Amazingly, we found that Mars will be closer during the 2003 apparition than at any time since the year -57,537!  At that time Mars was 0.372719 AU (apparent diameter of 25.13 seconds of arc). Competing calculations have been found that the year -57,617 was the closest approach of Mars to Earth, or 79 years further back in time, according to Aldo Vitagliano of the Universitá di Napoli Federico II in Naples, Italy [ Meeus , 2003].

NOTE:  Upon further investigation I discovered that by using my last birthday it skipped the August 27 date and added 79 years to our initial computations.  Must be a quirk in the integration method we used.  In a second computation the results matched Vitagliano’s values.

Additional results were gleaned from this experiment and we include some interesting points: First, during the year -79,241 Mars and Earth were 0.358104 AU apart and subtended an apparent diameter of 26.16 seconds of arc!

It should be noted that these values are Earth-Moon barycenter to Mars distances where slightly different values can result from using the methods used for predicting the Solar System Ephemerides in the short run -- say 100 years or so. A plot established several interesting points when Mars was as close to or closer to Earth than it will be during 2003. The integration output was printed with @1d steps to maintain the 1x10 -15 accuracy. The integration should have maintained 5 to 6 digits of precision over this number of steps, mostly round off error accumulation and a smaller amount from truncation errors (See Figure 1).

NOTE: Predicting harmonic errors of the perihelion date for Mars coincident with the date Earth is at or near aphelion would be difficult to calculate because of the long precession periods for both planets. The axis of rotational precession for is over a period of ~175,000 years [~173,000, Kieffer et al , 1992]. Additionally, Mars’ orbit also precesses causing the line of apsides (a line bisecting aphelion and perihelion) to rotate. This cycle is completed in 72,000 years that results in a gradual shift in the position of perihelion with respect to the space that the Solar System occupies [ Chattermole , 1992]. The axis of rotational for Earth precesses over a period of ~25,800 years therefore Compounding this problems of predicting their reoccurrence of this coincidental meeting of the Red Planet and Earth. 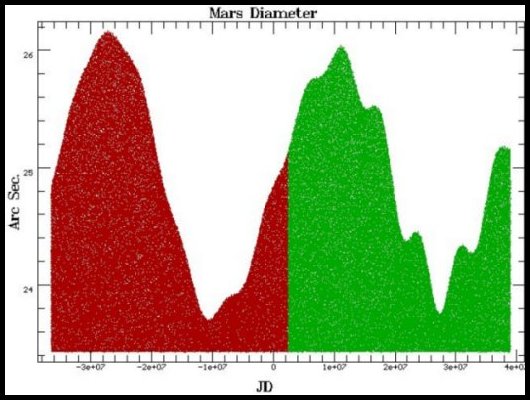 Figure 1. A plot from numerical integration for the orbits of Earth and Mars during the points of closest approach for a period of +/- 100,000 years from JD 2452200.5. Left, or the red points, indicate pre-2001 and right, or green points, are after 2001. The ordinate axis indicates the Julian day in millions of days and the coordinate shows the apparent diameter of Mars as seen form Earth during a particular closest approach.

The results published in this paper has come under scrutiny since first published and upon further examination we have found that our integration method calculations were correct; however, by arbitrarily choosing this author’s birthday on October 17, 2001 (JD 2452200.5) with a limit of +/- 100,000 years the integration skipped one 79 year repetitive cycle (for reasons hover this author’s head). Our quest to find the last time Mars and Earth was as close as it was in 2003 was off by 79 years. This has been corrected as stated above by a second computation.

First to publish anything on this problem was Belgian author and mathematician Jean Meeus. He calculated that Mars has not been closer to Earth since the year 73,000 B.C.. However, Meeus based his initial calculations on the work of French astronomer Pierre Bretagnon and was off by more than 20,000 years.

After Jean’s book was published, he contacted Italian mathematician Aldo Vitagliano (Naples University, Italy) and asked him to investigate the motion of Mars by numerical integration. Vitagliano reported back that the last time Mars was closer to Earth than during the 2003 opposition was on September 12 of the year 57,617 B.C.. This can be read on his web site at:  http://spider.seds.org/spider/Mars/Add/whenwasmarsclose.pdf

We are thankful to the late astronomer Jack Horkheimer for asking the question and hopefully the answer was satisfactory. While it is of interest to observers to know how close Mars will approach Earth during any particular apparition we pay little attention to exact details of the apparition characteristics.  To many it would be only a passing interest to know that Mars will reach some historic distance from Earth or be higher in the sky, etc., but to relate to orbital elements is not very exciting to most Mars watchers. In other words, most of us like to look at Mars without all the mathematical fuss.

At the times when Mars approaches very close to the Earth we know observers will likely want to get out their telescopes and record what the see of the Red Planet, and we in the Mars Section are more than happy to encourage them to do so.  One way is to make upcoming apparition sound exciting and to interest observers to participate in our observing programs.

However, in 2003 Mars came closer to Earth than at any time since we can remember, or at least for anyone alive today.  While we usually do not take the time to compute the orbit of Mars so far in the past or future it was never the less a fun project for our friend Jack Horkheimer and his TV audience. It shows us the unusual nature of the orbital relationship of Mars and Earth and hopefully to help us realize how erratic our Solar System really is. The Solar System is always in a state of change!

Meeus, Jean, (2003), "When Was Mars Last This Close?" The Planetarian (Journal of the International Planetarium Society) , March