Mars is the only planet whose surface can be plainly seen and charted from Earth. The planetary observer sees the small globe of this planet as an intriguing, challenging, and dynamic world that is in many ways similar to Earth. We see features such as: four seasons, global climates, changeable weather, storm clouds of water vapor, howling dusty winds, seasonal thawing of polar ice caps and a variety of alien, grotesque surface features which predictably change with the season, while other features mysteriously move during decades.

We can take solace however; at least Mars is similar to Earth in that it displays white polar caps. These brilliant white caps composed mainly of carbon dioxide with a trace of water ice, wax and wane during the Martian year. This seasonal variability is caused by the earthlike axial tilt of Mars of 25. 2°. Indeed, many of the observed surface changes and atmospheric phenomena appear to be directly coupled to the seasonal climate which causes the spring thawing phase of one polar cap and the autumn formation phase of the opposite cap.

The phase angle or terminator will increase from the time we first see Mars rising early in the morning sky until a week or two before western quadrature. After quadrature the phase will decrease until it nearly disappears around opposition.  The Solar Elongation for Mars is the angle between the lines of sight from Earth to the Sun and from Earth to Mars.  When these lines of sight form a right triangle then Mars is at quadrature (eastern or western).   For detailed definitions and graphics for the motion of Mars in our sky see this excellent web site:  Elongations and Configurations. 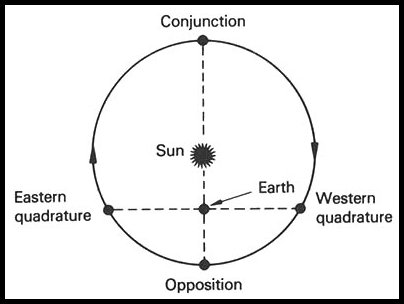 Figure 2-1. A heliographic chart of the orbits of Mars and the Earth showing the relative positions of both planets.  Quadrature is when Mars is directly east or west of Earth as shown.

Tables presented in the pre-apparition reports are based on computer programs written and complied by the author using equations found in the book Astronomical Algorithms by Jean Meeus [Meeus, 1991].

A Nearby Neighbor in the Solar System

The orbits of Earth and Mars are elliptical, Mars having an eccentric orbit while Earth’s is more nearly circular. The distance between the Earth and Mars varies from 247,900,000 miles, when Mars is in conjunction with the Sun and may approach within 34,670,000 miles during Perihelic apparitions, or 61,000,000 miles during Aphelic apparitions.  A brief description of planetary motions in orbit around the Sun can be found in Planetary Aspects. 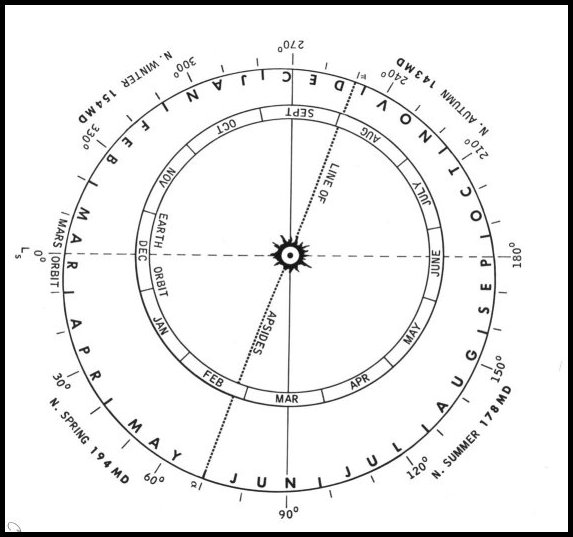 Figure 2-2.  Heliocentric Orbits of Mars and Earth showing the relative positions of both planets in their respective orbits around the Sun measured in degrees.  The inner rings are the season of Earth and the outer ring is the seasons for Mars.

As a general rule for predicting oppositions of Mars is that the planet has an approximate 15.8-year periodic opposition cycle, which consists of three or four Aphelic oppositions and three consecutive Perihelic oppositions. Perihelic oppositions are also called "favorable" because the Earth and Mars come closest to each other on those occasions. We sometimes refer to this as the seven Martian synodic periods. This cycle is repeated every 79 years (± 4 to 5 days) and, if one were to live long enough, one would see this cycle nearly replicated in approximately 284 years. For a detailed discussion on the distances and apparent diameters of Mars see: THE OPPOSITION CYCLE OF MARS. 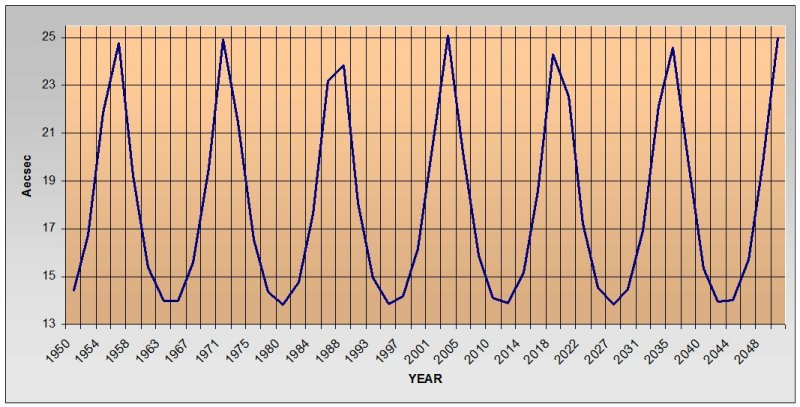 Figure 2-3. Maximum apparent disk diameter of Mars for its oppositions between 1950 and 2050, inclusive. 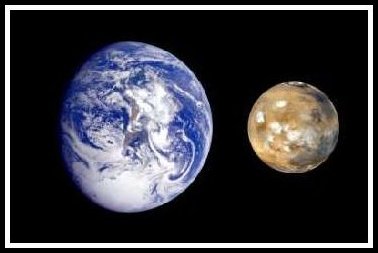 Days and Seasons on Mars

The Martian solar day, or "sol", is about 40 minutes longer than a day on Earth. Consequently Mars only rotates through 350° of longitude in 24 hours. As a result, astronomers on Earth observing a particular Martian surface feature one night, will see that same feature positioned around 10° further west on Mars (or closer to its morning limb) the next night at the same civil time. The difference in rotational periods of Earth and Mars causes an illusory retrograde rotation. So, a particular feature will appear to back up about ~10° each night at the same observing time. If one sees a spot in the center of the planet it will appear to drift towards the evening side of the planet and will be back in the same location about 36 days later. A very good graphic article on the seasons of Mars: http://www-mars.lmd.jussieu.fr/mars/time/solar_longitude.html

Mars and Earth have four comparable seasons because their axes of rotation (obliquity relative to orbital plane) are both tilted at about the same angle to their respective orbital planes, 25.1894°+/-0.0001° for Mars and 23.5° for Earth [ Kieffer et al, 1992] [ Yoder and Standish , 1997].  In describing Martian seasons, scientists use the term "Ls" which stands for the Areocentric longitude of the Sun along Mars’ ecliptic. Similar to terrestrial seasons, the Ls system is reckoned directly from the Sun’s ascending node or Martian northern spring equinox position, where Ls = 0°.  Each beginning season is 90° from the next one, e.g., Vernal Equinox (0° Ls), Summer Solstice (90° Ls), Autumn Equinox (180° Ls), and Winter Solstice (270° Ls) in the North Hemisphere of Mars. The seasons are, of course, reversed for the southern hemisphere. NOTE : Prior to Mariner 9 this value was 25° +/- 0.1° [ Michaux, 1972].

Figure 2-5.  Graphs showing the relative seasons of Earth and Mars in their respective orbits around the Sun. Left: show the seasons for each planet. Right: Shows the relative posits of each planet as it relates to cardinal points in each orbit.

The axis of Mars does not point toward Polaris, our North Star, but is displaced about 40° towards Alpha Cygni. Because of this celestial displacement, the Martian seasons are 85° out of phase with respect to terrestrial seasons, or about one season earlier than ours. Consequently, when you observe Mars next spring and summer, it will be winter and spring, respectively, in the Martian southern hemisphere. 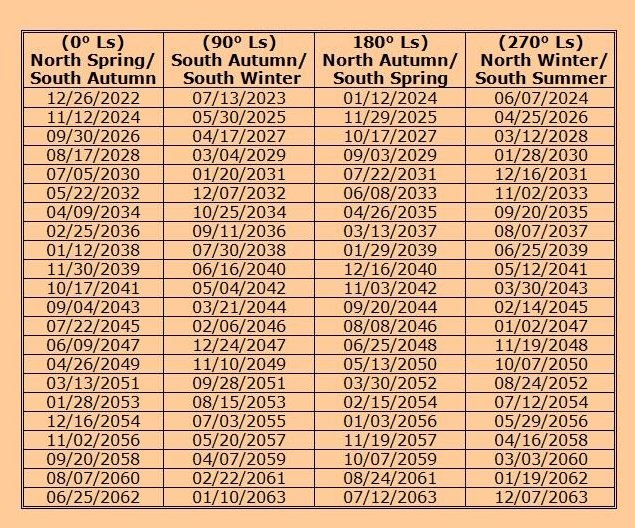 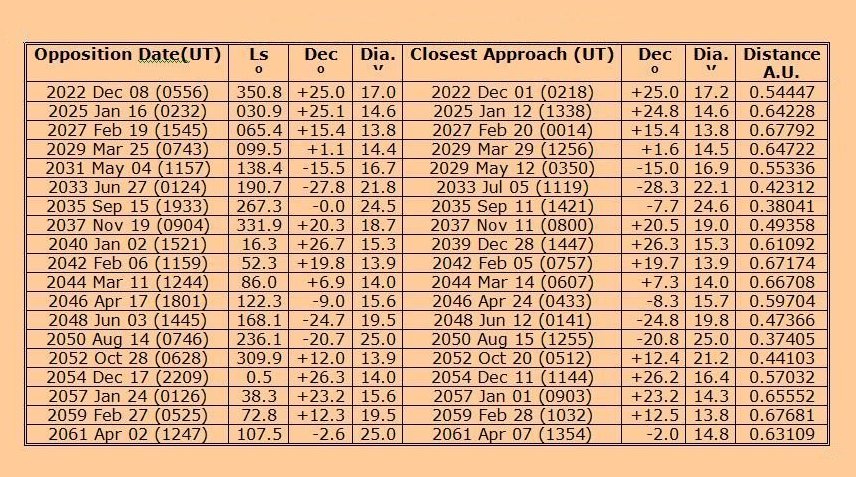 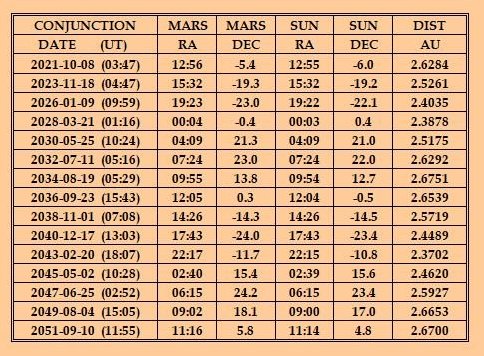 NOTE: Ls is the planetocentric longitude of the Sun along the ecliptic of Mars’ sky. 0° Ls is defined as that point where the Sun crosses the Martian celestial equator from south to north, that is the planet’s northern hemisphere vernal equinox. The other Ls values that define the beginnings of Martian northern hemisphere seasons are: summer, 90° Ls; autumn, 180° Ls; and winter, 270° Ls. For Mars’ southern hemisphere these values represent the opposite seasons. Distance (A.U.) - Distance from Earth to Mars in astronomical units, where one (1) A.U. equals 92,955,807.267 miles or 149,597,870.691 km.