In a four part series of A.L.P.O. Mars Section reports I presented results of a computerized statistical analysis of the meteorology of Mars (Beish et al, 1986 and 1987). Using computer programs developed for analysis of the Martian environmental and climatic surveys, an extensive statistical evaluation of fourteen apparitions was presented. A statistical analysis for past meteorological activities for clouds, bright surface frosts, and dust clouds are shown by general table of percentage of occurrence sub-divided in seasonal intervals and averaged over fourteen apparitions.

The statistical method discussed in this article was used in a paper Don Parker and I published in the Journal of Geophysical Research some years ago (Beish et al, 1990). Complex cyclical data can be used to forecast this trend analysis, or to plot a time series. The trend can be thought of as the average departure from the "mean."

From an interesting concept taken from an old college outline (Longley-Cook, 1970) I selected methods detailed in a chapter on "Time Series" to show the trends in observed cloud activity on Mars during a period from 1969 through 1985.

To calculate the Seasonal Index we first determine the tabular values from:

NOTE: The monthly trend is found by dividing the annual trend by 12. The annual trend is determined by the average number of clouds from the first half (1969-1975) and second half (1978-1984) of the complete 8-years series.

Table 1. A typical set of twelve 30-degree Ls periods of recording the number of Martian discrete clouds observed from 1969 through 1984 by ALPO/IMP. The Martian year of four seasonal and 12 sub-seasonal periods start with its vernal equinox at 0° planetocentric longitude (Ls) and moves eastward in its orbit through the seasons or 360 degrees.

We can then produce a plot of the times series trend line for discrete clouds observed on Mars during eight apparitions and forecast an approximate number of clouds an observer is likely to see in future apparitions for a particular season. This study has been extended to include the 1965 apparition and the 1988, 1990, 1993, and 1995 apparitions. Using the first study to test the second time series model it was determined that a very close correlation exists between the two studies (Beish, 1999). 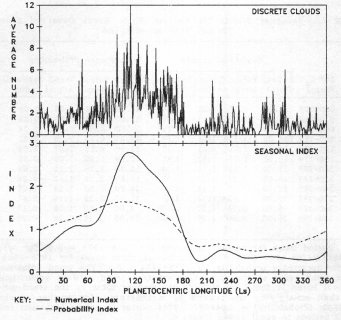 Longley-Cook, L.H., Statistical Problems and How to Solve Them, Barnes and Nobles, New York, 1970.